Just The Word is a powerful tool for figuring out how a word patterns with other words: what are possible grammatical phrase structures for a word, and what words go with your search term? Just The Word uses a subset of 80 million words of the British National Corpus, a database of published written language and transcribed spoken language, to identify these patterns.

Let’s look, for example, at what Just The Word can tell us about ways to use the word “eventual,” because we’re writing a paper with the sentence, “This process will eventual produce a purified substance,” and we want to check our grammar and word choices. We can see that the only common phrase structure is [eventual + noun]. We see two meaning clusters, one about winning and one about results. We see

First, we can see that the only common phrase structure is [eventual + noun]. Whoops, we have [eventual + verb]. We see two meaning clusters, one about winning and one about results. We see a third collection of common phrases with different meanings. 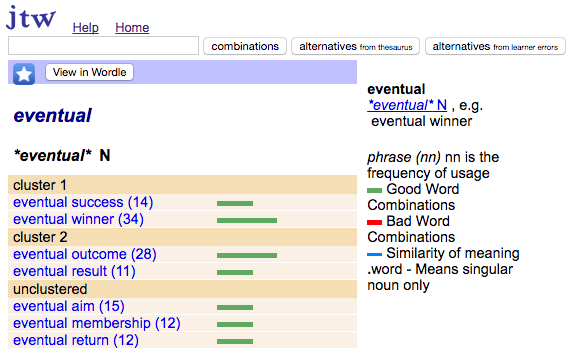 So, let’s look up “eventually,” the form that we maybe need with verbs. 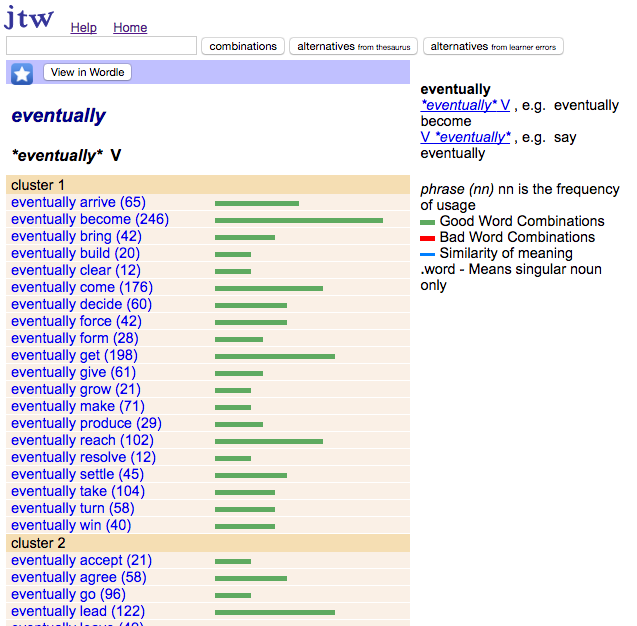 Aha! We can confirm that this is a solid usage pattern for “eventually,” and that “eventually produce” turns up 29 times. We can double check that these 29 examples represent the kind of meaning that we want by clicking on the phrase. Scanning through these examples, we can see that a few of them do indeed talk about a natural or experimental process, which is what we’re looking for.

We might also take note of the multiple examples that refer to producing films or to social conditions that produce people with certain behaviors.

How to use these e-Resources

Self Study e-Resources is brought to you by the English Language Institute. We have collected high quality free sites, apps, and other digital tools for advanced English language learning. We provide a brief description of each resource with tips on what we like best about each one. You can search by keyword or click on tags to navigate resources we've reviewed.

e-Resources are brought to you by

The English Language Institute, Regents of the University of Michigan. © 2016-2017 http://lsa.umich.edu/eli
Self Study e-Resources All Rights Reserved
Theme by Grace Themes